The Hindustani-Surinamese Sharda Nandram set foot on Nyenrode's soil 25 years ago: "Actually, two years earlier, in April 1995," she shares enthusiastically. When Nandram was nineteen, she left Paramaribo to study psychology and economics at the University of Amsterdam. She obtained a PhD in social psychology, and since 2006, she has been focusing more and more on Hindu spirituality. From home she was taught Hindu values, such as discipline, doing your best, and simplicity: "We also went to the temple sometimes, which was a magical moment for me. There we always offered sweets. It taught me where my roots are."

Nandram's thoughts about life developed at an early age. At eleven, she frequently went to the hospital because she regularly fainted and suffered from stomach bleeding. The doctors were puzzled at the time. Nandram reflected on life in the idle hours when there were no visitors for her. Whether this was the tipping point in relation to her interest in spirituality? Yes, Nandram thinks it was: "I was for a moment in another world. I don't know where but for me that was the moment I knew there was more. I still had so much to do, so much to learn. I was scared, but being in the hospital also taught me to put fear aside. Help always comes to you when you need it." 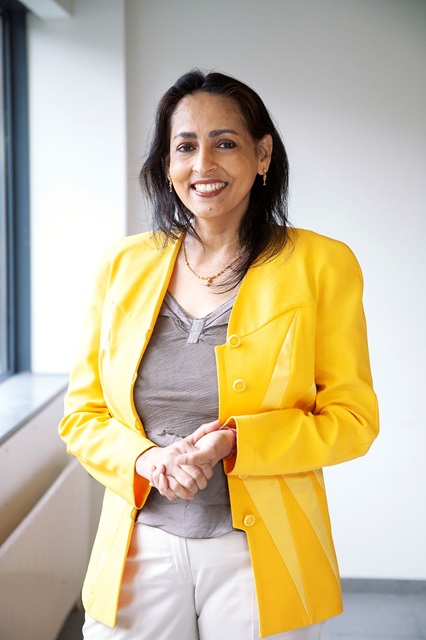 Nandram started her career as a researcher at NYFER, an economic research institute at the time affiliated with Nyenrode. Nandram worked extensively with founder Eduard Bomhoff. In addition to conversations about economics, they also talked about philosophy, ethics, and citizenship.

Together with Professor Karel Samson, she published the book "The Spirit of Entrepreneurship" in 2006. That was the first time that Nandram openly connected business and spirituality: "We were looking for real stories from entrepreneurs. What does entrepreneurship mean to them? What prompted them to start doing business? What lessons have they learned through time? We had wonderful conversations that led us to the core of entrepreneurship. To the deepest drives intuition, emotion, and faith."

Soon after, she met with the late professor Paul de Blot: "I saw Paul as an Indonesian man for whom I had a lot of respect. Sometimes I asked a question but got no answer; I thought he was absorbed in his books. Later I understood that his hearing had deteriorated. From my upbringing and cultural context in which I grew up, you have a lot of respect for older people and you don't go up to someone as quickly and pull up a chair to start a conversation. Yet I did at one point and it turned out surprisingly well." De Blot asked Nandram to set up the chair of Business and Spirituality together.

Feeling at home wherever you are

Spirituality became significantly more important to Nandram's over the years: "During and after my mother's illness, I had many conversations with my father. His stories intrigued me and touched my heart. It motivated me to put these conversations on paper, and I tried to find the nuances by translating the Hindi, which I spoke with my father, into Dutch."

The family story eventually takes Nandram to India, where her grandparents grew up. She wrote the book "Feel at Home Wherever You Are" about her own family roots. Her family supported her in telling the story and decided to sponsor her to make it a professional publication. For Nandram, this was the final piece of the puzzle. She traveled to Jodhpur and Bikaneer, her grandparents' hometowns in the Rajasthan region. "I didn’t find my answers in psychology nor in economics. My conversations with entrepreneurs were enriching but I was convinced there was more. That’s what this journey brought me," says Nandram.

In 2018, she handed over the book, published in Dutch, English and Hindi, to the community of Jodhpur. She was showered with gratitude, "[b]ecause their daughter came home, that's how they saw me. It was a special feeling. To the community, giving something back to the community by telling this story was so special. In Hinduism, throughout your life, you give something back to your gurus, your (grand)parents, and nature. I feel I’ve given back the story of my grandparents to the land where they grew up."

A fundamental place for spirituality

In her inaugural lecture earlier this year, Nandram showed that spirituality also deserves a fundamental place in science: "Spirituality is an anchor for the pursuit of happiness and prosperity. Spirituality is part of human nature and nothing new, but we’ve forgotten about it."

To her, Nyenrode means having the freedom and space to do things that really make you happy. Pioneering to introduce the soft side of spirituality and to find a language to take into account the hard side as well. Bringing Business and Spirituality together.

Is the circle complete after 25 years? When will we be truly complete? Nandram has only one answer: "When you are within yourself. Education and a career take you further, but life itself is the pre-university school for your soul.”

Sharda Nandram, born in Suriname, has worked at Nyenrode Business University since 1995. In addition to her professorship at Nyenrode, Nandram works as a professor of Hindu spirituality and society at the Vrije Universiteit Amsterdam (VU). She became a doctoral student in both psychology and economics and received her PhD within the department of social psychology at VU. Through both her professorships, she intends to focus on the underlying central theme of what drives people at the deepest level and its impact on life.