It is now 25 years ago that Herman van der Meulen began his career at Nyenrode Business University. Within the university, Herman wears different hats. He is on a ‘friendly basis’ with Sinterklaas (comparable to Santa Claus) for example, and he literally plays the clown during lectures; red nose included.  Herman is in particular extremely popular among our students, who gave him the nick name ‘the Herminator’. What is the secret to Herman’s success and where does he get his inspiration from? Together with Herman we look back at 25 beautiful, inspiring and memorable years at Nyenrode.

Herman’s nick name ‘the Herminator’ stands for firm but fair, with genuine interest being Herman’s top priority: “Genuine curiosity and interest means being there for someone at a certain point in time, which goes beyond the doors of the lecture hall”.

Genuine interest comes from the heart. “What did you enjoy most last week is a completely different question than when I ask how you are doing”. To the question whether something like genuine interest can be learned, Herman’s answer is quite resolute: “Yes, of course. Life is like a parachute. You will reach your destination when you open yourself up”. 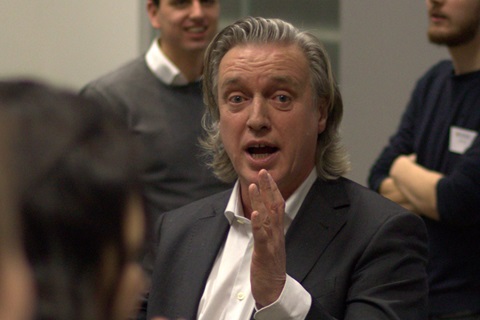 Over the past 25 years, eleven-time nominee Herman was also crowned with the Nyenrode Teaching Award. Besides the fact that all eleven awards were equally special, according to Herman, this last award has truly touched him in the heart. To Herman, that one represents exactly what teaching is all about and where his heart as a teacher is at.

“In 2020 I was honored to receive The Teaching Beyond Teaching Award, initiated by the students. From our purpose, Serving society by shaping responsible leaders, we help build sustainable eco systems, we think from the standpoint of cooperation and we inspire each other every day. But it is more than academic knowledge transfer. This award is the mirror of how we portray ourselves as a person in relation to the students”.

When it comes to forming the students, the list of competences goes on and on: “The forming of students at Nyenrode consists of: showing empathy, listening, asking questions, working together, cheering on, co-creating, adapting, reflecting, learning and being creative with result and balls. That is what you need to show when you teach. The teacher is the student’s guide on their journey of learning. That goes beyond the books”.

Herman uses a metaphor to explain his way of dealing with people: “Different techniques, colors and shapes create the painting of your life. But you can’t tell a student: here you have brush, now draw a line. No, instead you ask questions and inspire, which helps the student to pick a color and technique themselves and create their own painting. Learning is done together, in an inspiring environment”, Herman adds. “When you take the time to discover each other’s life painting, including its changes, you get to deeper insights and you will form a genuine connection”. 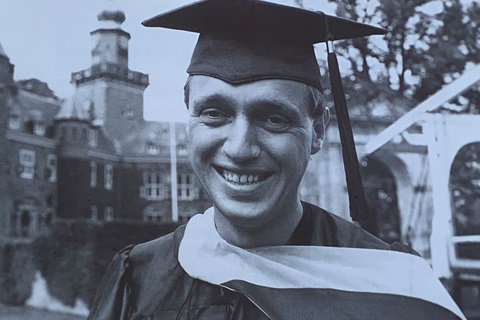 To the question where Herman finds his inspiration, he tells us about his childhood. Long before his professional career even began, Herman looked at his father as his inspirator. “As a little boy, I was the only kid on the block who was able to go to the atheneum (high-level middle and high school). Together with my dad, I went to an introductory interview, but the director didn’t seem very convinced of my capabilities. We came from an underprivileged background where studying didn't make much sense. At that time I didn’t understand what the director meant, but my dad responded: “Manus, the director thinks you can’t do it. But every man needs challenges to be able to perform”.

In recent years, Herman has become inspired by late colleague Paul de Blot. His way of teaching, his view on life and his spiritual insights have provided Herman with personal insights as well: “Paul de Blot has taught me to ask myself every day what I am grateful for. And after having worked for 25 years at the university I am still, up until this very day, grateful that I can fulfill this role according to my own insight. Nyenrode gives me the space and freedom to make this happen. That is why I like to conclude with: stay true to yourself, in whatever it is that you do. You will radiate that and it will give you energy. What you genuinely give from who you are, is being mirrored by what you receive”.