“Entrepreneurship is about social added value”

In the Pfizer hall at Nyenrode, abundantly decorated with flowers, Nyenrode Business Universiteit celebrated its 75th birthday today. This so-called Dies Natalis coincided with the official start of the university’s anniversary year. During the subdued but festive gathering, two honorary doctorates were presented, with a third one being announced.

The festivities took place both with a group of guests who attended the ceremony in person, all following the COVID-19 regulations, and with an online audience. The University Board, faculty members, and alumni and students looked back on Nyenrode’s rich history, all in their own way and using different forms. Prof. dr. Koen Becking opened the festivities.

Becking looked back at the founding of the NOIB, the predecessor of the university as we know it today. “On 20 November 1946, HRH Prince Bernhard raised the flag on the castle’s forecourt to officially open the Netherlands Foreign Educational Institute, the N.O.I.B. (…) The story of Nyenrode tells us a lot about who we are today. This story is the foundation of our purpose and has helped us build the pillars of our core values.” He also talked about the founding fathers of Nyenrode, including Albert Plesman, who, after WWII had ended, initiated the establishment of a school for ‘doers’. Becking emphasized that their idealistic legacy is still firmly entrenched in Nyenrode’s core values: Leadership, Entrepreneurship and Stewardship.

The core values were mentioned again when Becking announced the honorary doctorates: “Diversity and aspects that characterize all our academic fields were important factors we took into account when deciding who deserved these awards. And it is safe to say that we have selected three people who are worthy recipients of this honorary title.”

Becking ended his speech with a personal message from outgoing Prime Minister Mark Rutte. Mr Rutte emphasized that the founders of Nyenrode already realized how important international business was, and that it is still the strength of the university: “… not only looking back, but also for the future of our country. Nyenrode continues to play an important role. History continues to be made,” Rutte concluded.

After the congratulations by Mr Rutte, prof. dr. Barbara Majoor presented the first honorary doctorate. Via a live connection, she delivered her laudatio speech to prof. dr. W. Robert Knechel. “Robert Knechel has made distinctive contributions to the education of next generations of auditors in practice and scholars in the research community in the Netherlands and abroad, relentless efforts to move auditing research forward for the better of the corporate reporting and assurance ecosystem, and generous contributions to the knowledge exchange between science, practice, and society at large, such as expressed by the Nyenrode trinity: Entrepreneurship, Leadership and Stewardship”.

Prof. dr. Knechel indicated that he considered it an honor to represent the core value of stewardship with this honorary doctorate. He addressed Nyenrode’s core values. “What do all these core values have in common?” he asked. “For me, it is hope. And hope makes the world a better place.” He also spoke about trust, as trust is essential for a well-functioning society. “And trust and stewardship go hand in hand.”

Prof. dr. Kitty Koelemeijer delivered her laudatio speech to entrepreneur Willem Blijdorp. Koelemeijer expressed her admiration for the way in which Blijdorp has been leading his enterprise. Using three strategic dilemmas, she emphasized Blijdorp’s extensive experience and successes. “This honorary doctorate is fully in line with the philosophy of Nyenrode’s founding fathers, and with the core values of Nyenrode in general and entrepreneurship in particular.”

Blijdorp also shared some wise lessons with the students: “Entrepreneurship has its ups and downs. But even if you lose a couple of matches, you can still win the competition. You can achieve continuity with innovation. A true entrepreneur continues to innovate. Also, an entrepreneur often has a positive naiveté and optimism. Courage and boldness are important prerequisites for being successful in business.”

And lastly, in her speech, prof. dr. Désirée van Gorp announced that she hopes that at next year’s Dies Natalis she can present an honorary doctorate to Dr. Ngozi Okonjo-Iweala, Director-General of the World Trade Organization.

In between the presentations of the honorary doctorates, videos were shown of a number of alumni. Charles de Wilde (NOIB 1947) was interviewed by Linze Andringa (BScBA 2019), president of the Nieuwe Compagnie van Verre (NCV). Menno van Eijk (BBA NBBS 2010), founder of the Jongste Compagnie van Verre (JCV), talked to president Isabella van de Graaff (MSc 2021) about the foundation of their association. And Kees van Tilburg talked about his time as president of the Vereniging van Accountancy Studenten (VAS) to Danielle de Jongh (BScA 2016, and Master of Tax Law), the current president of the association.

Nyenrode CFO Remmelt Vetkamp closed the ceremony with his personal wish for Nyenrode for the next 75 years: “My wish for Nyenrode is that we can continue to educate and shape as many iconic leaders as we have done in the past. Leaders who make a difference, whether it is in politics, society or economics. We shoulder our responsibility together.” 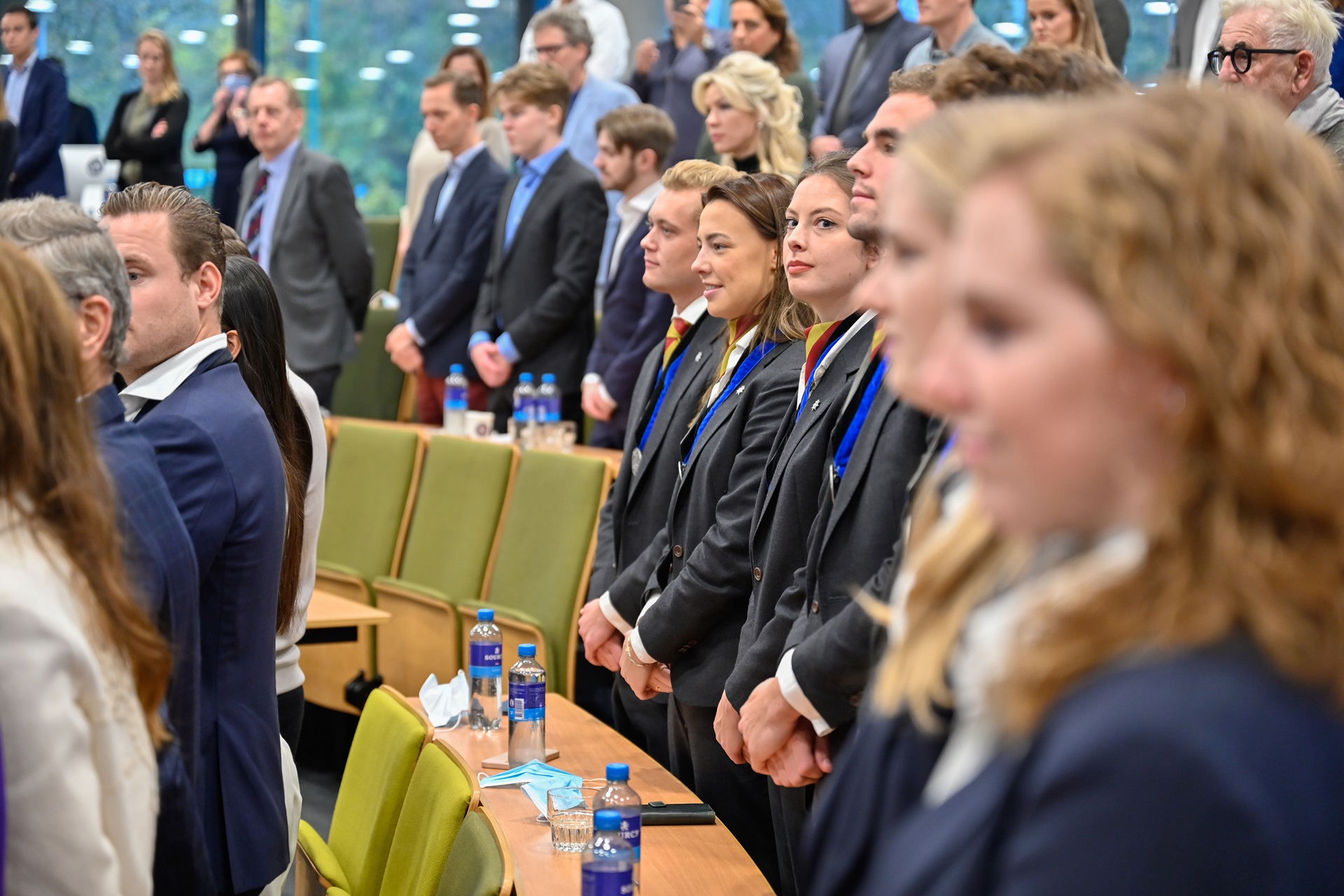 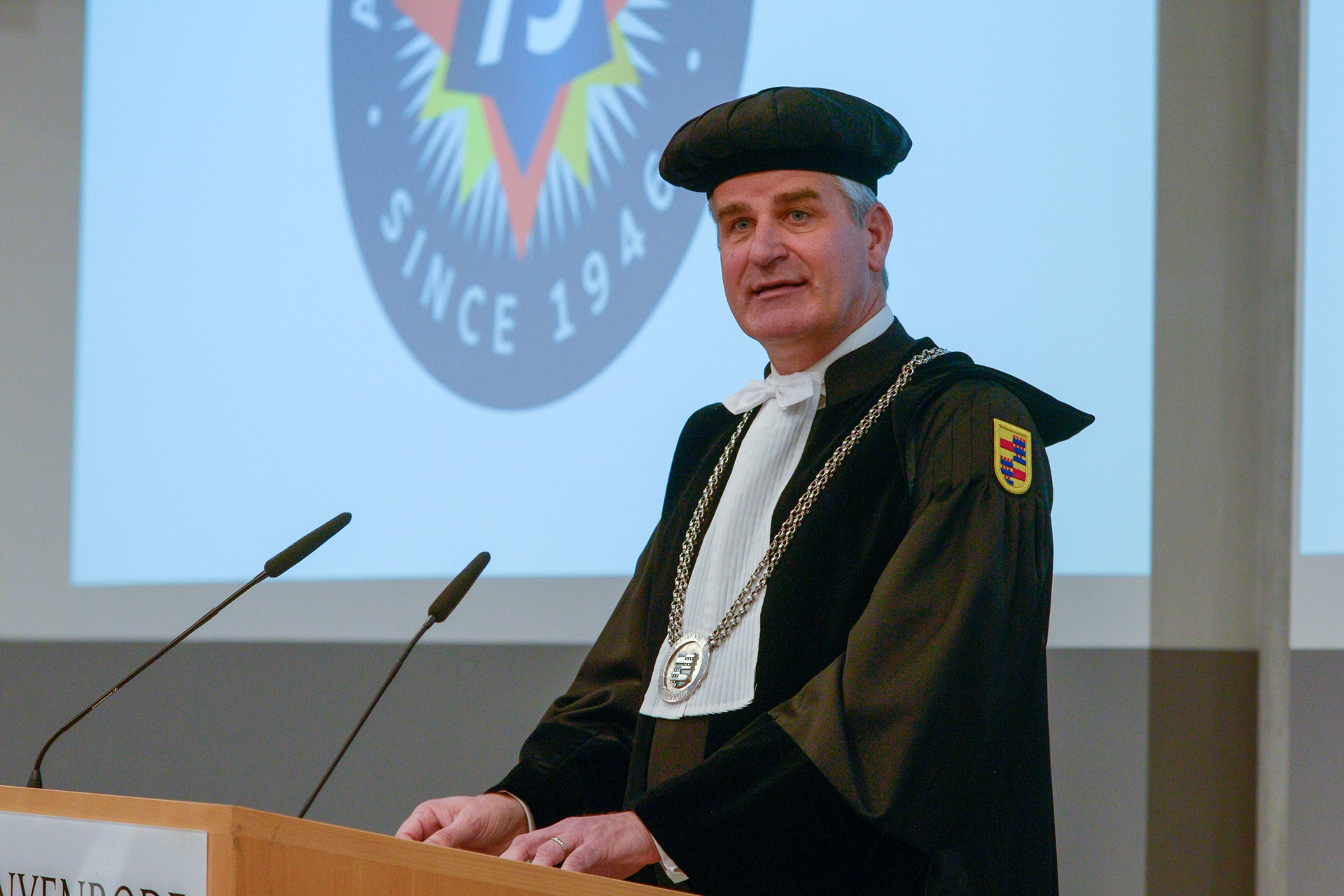 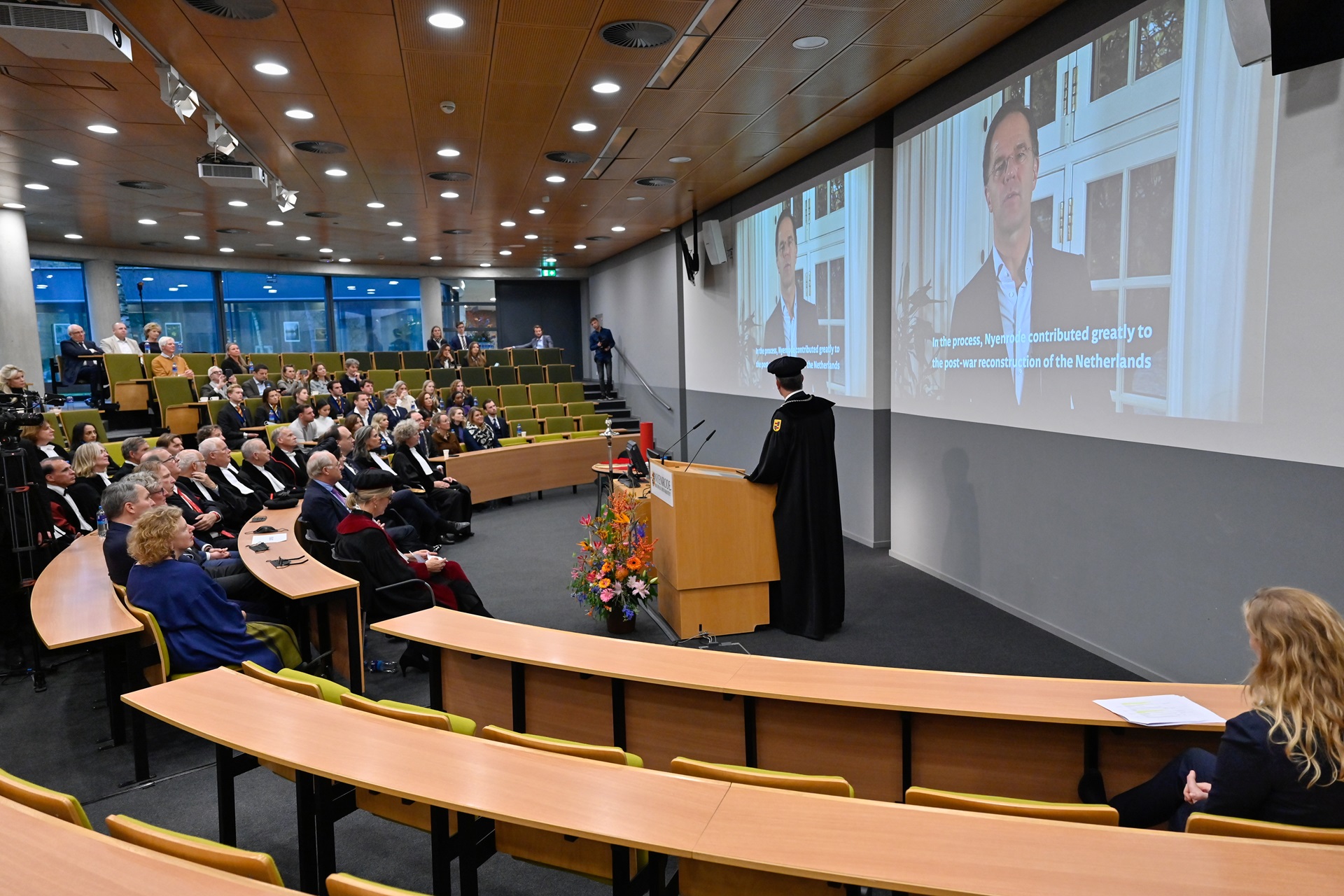 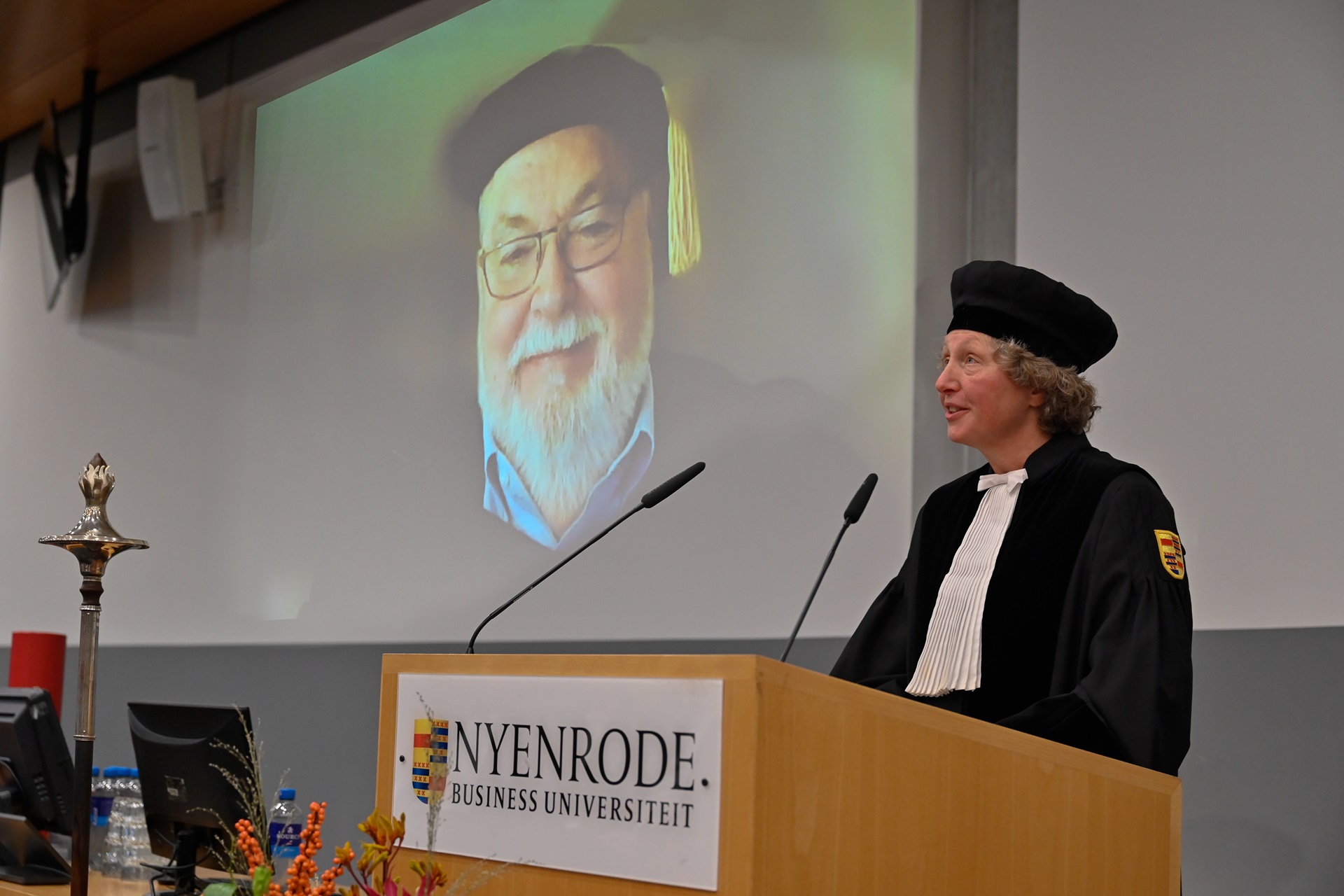 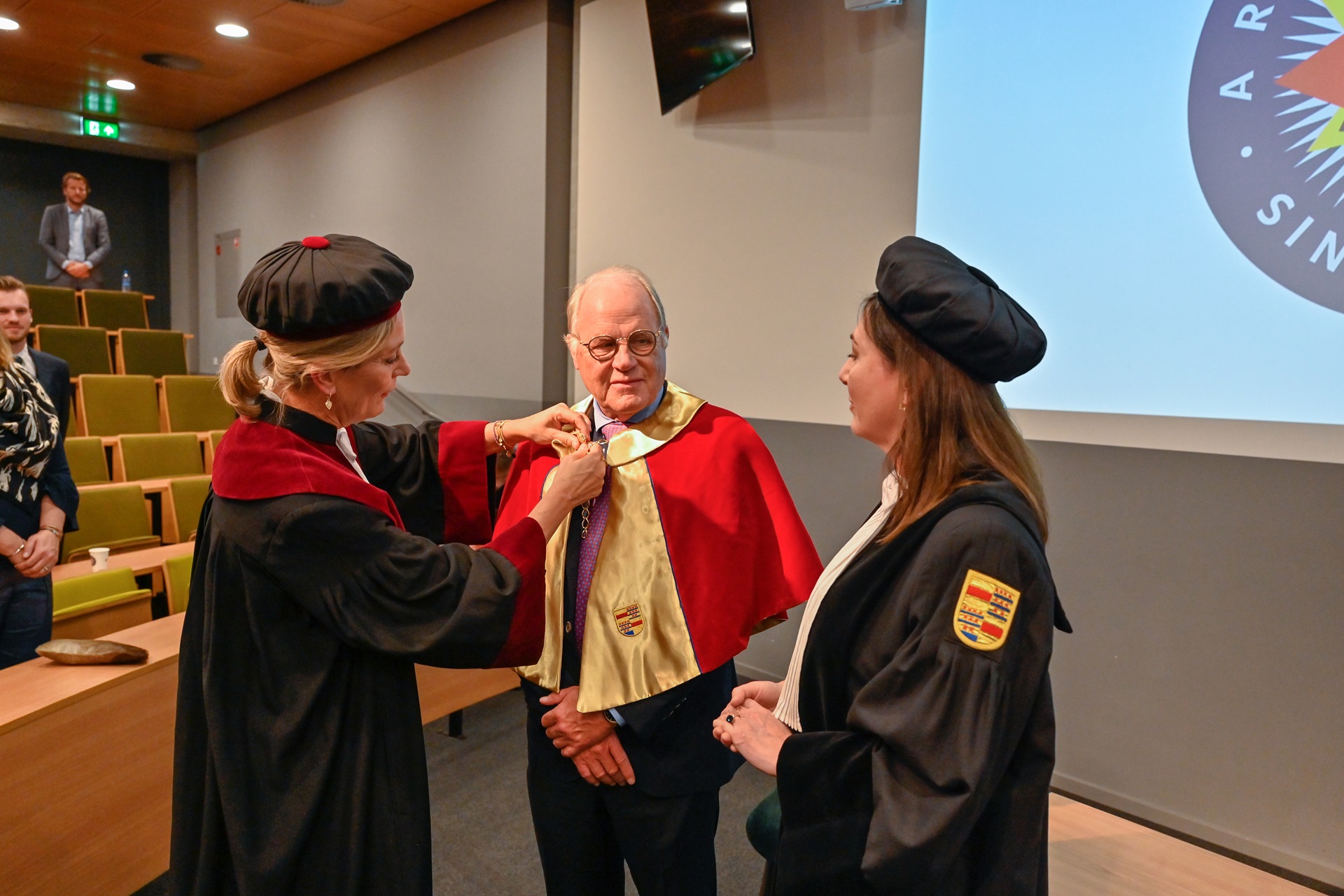 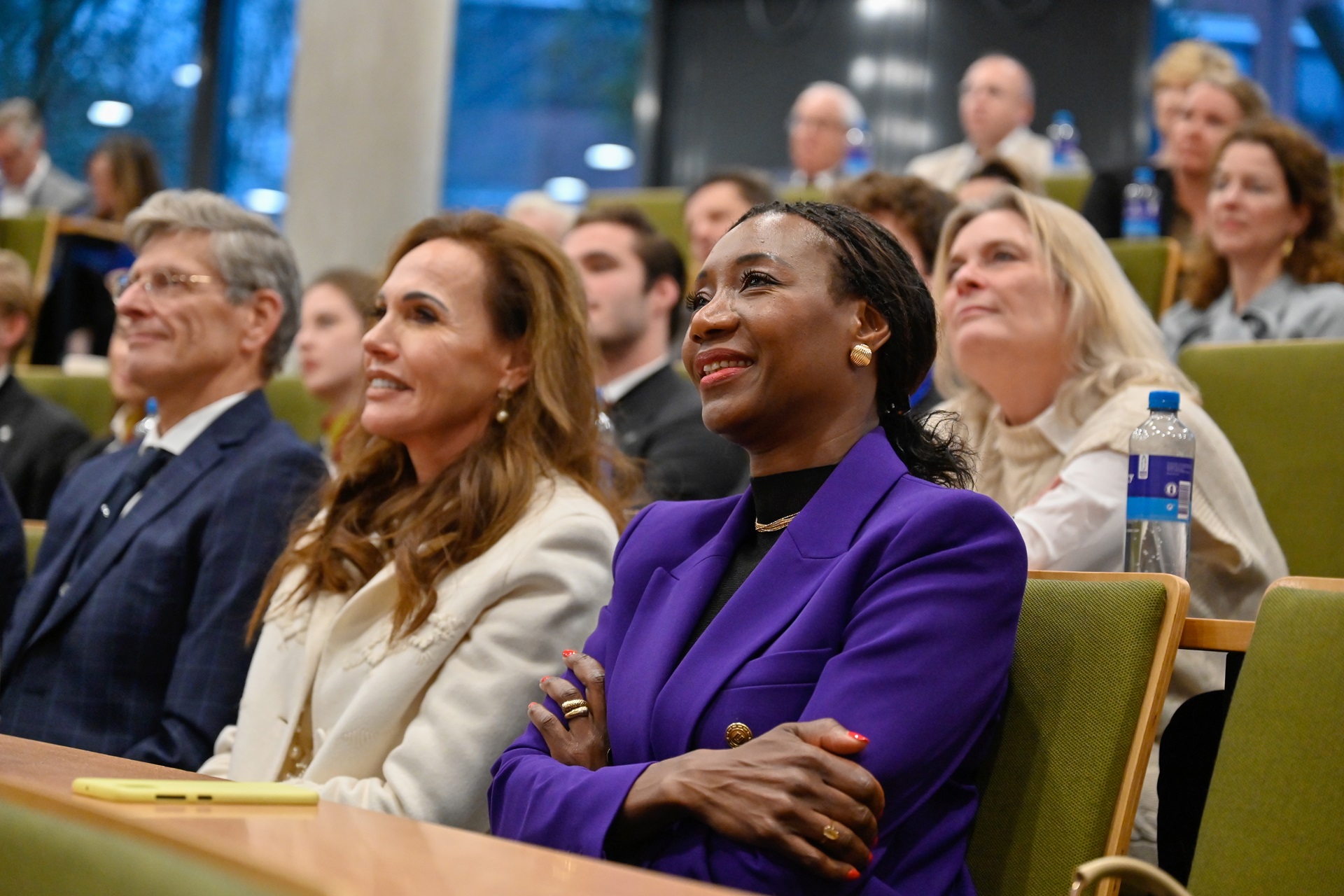 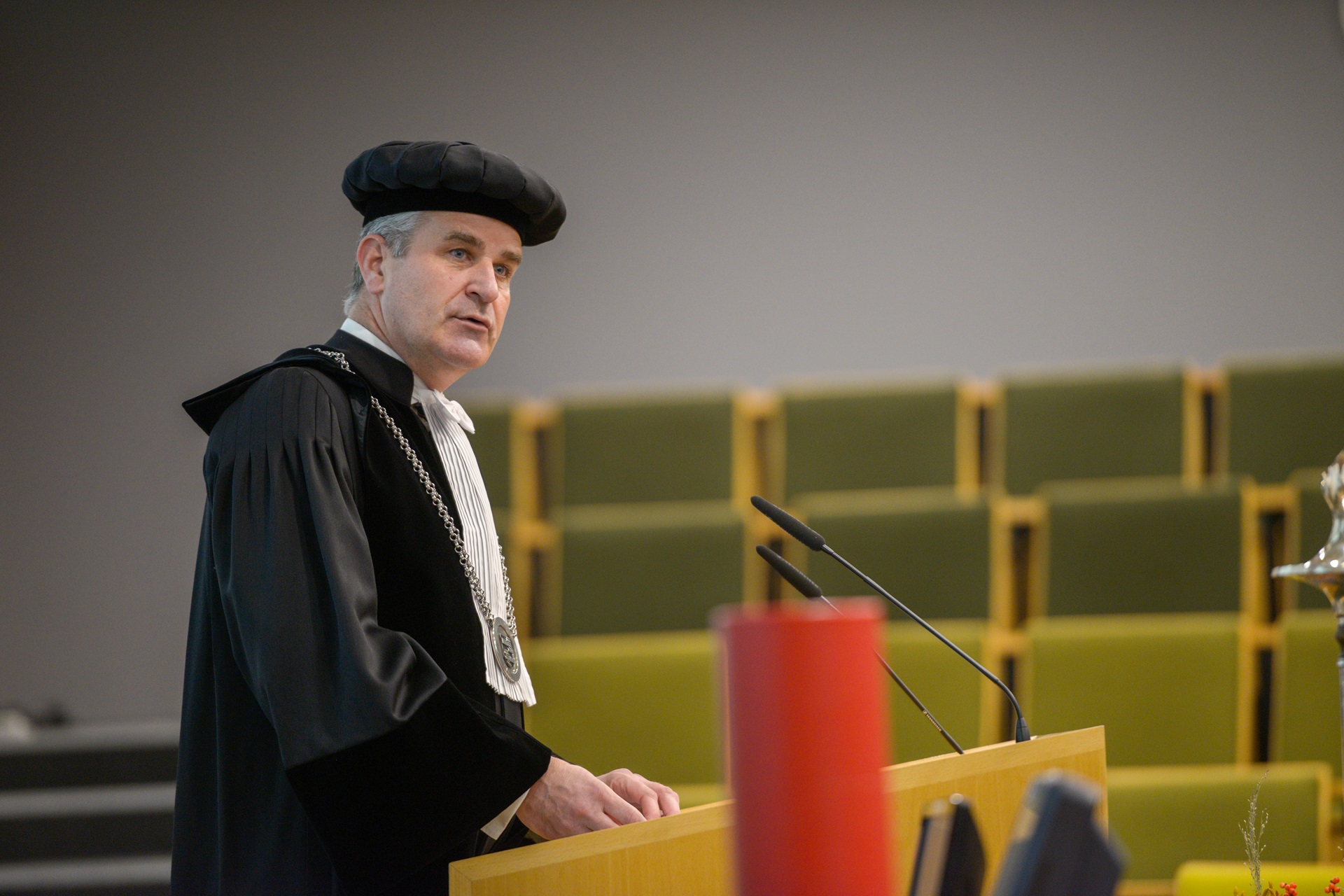 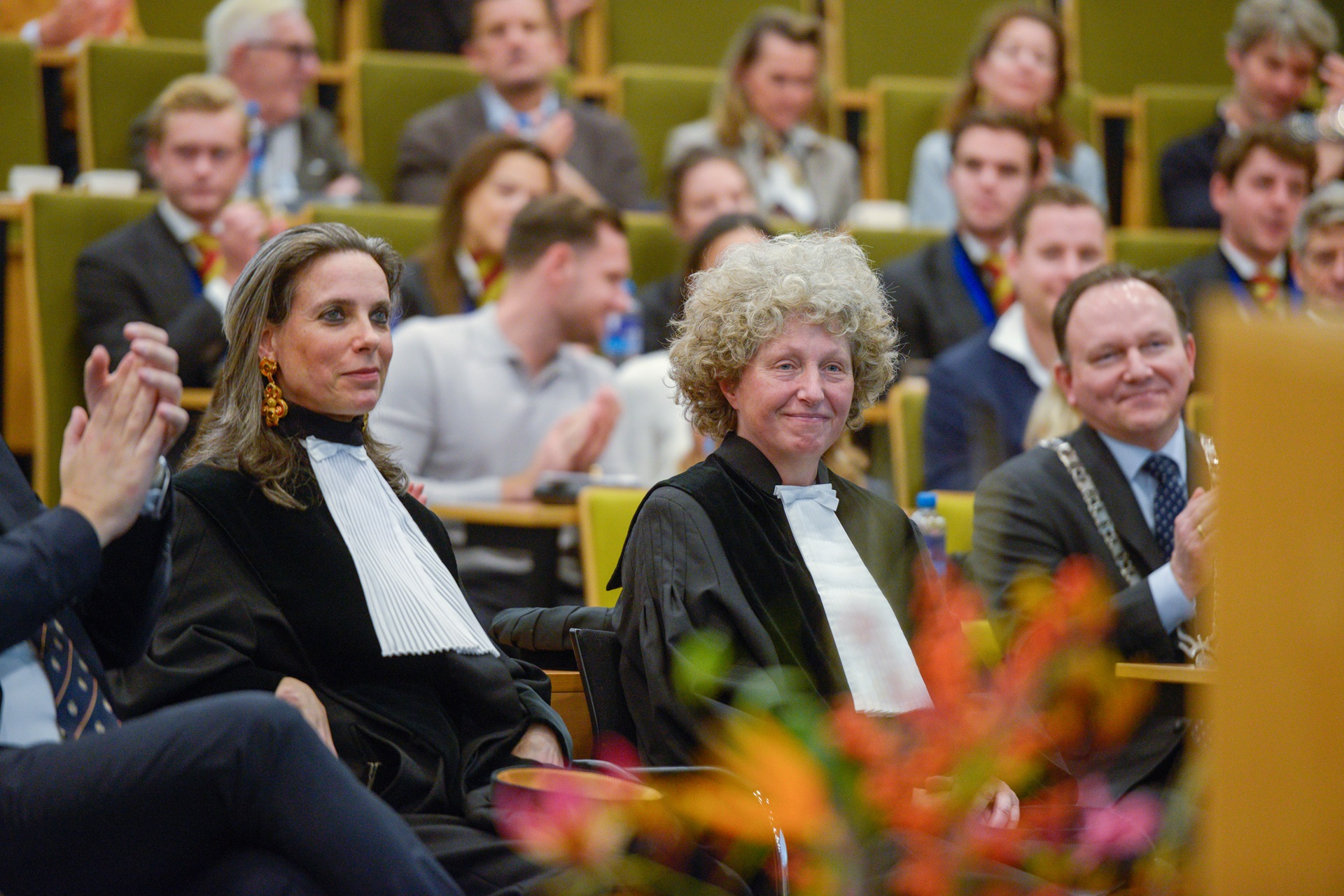 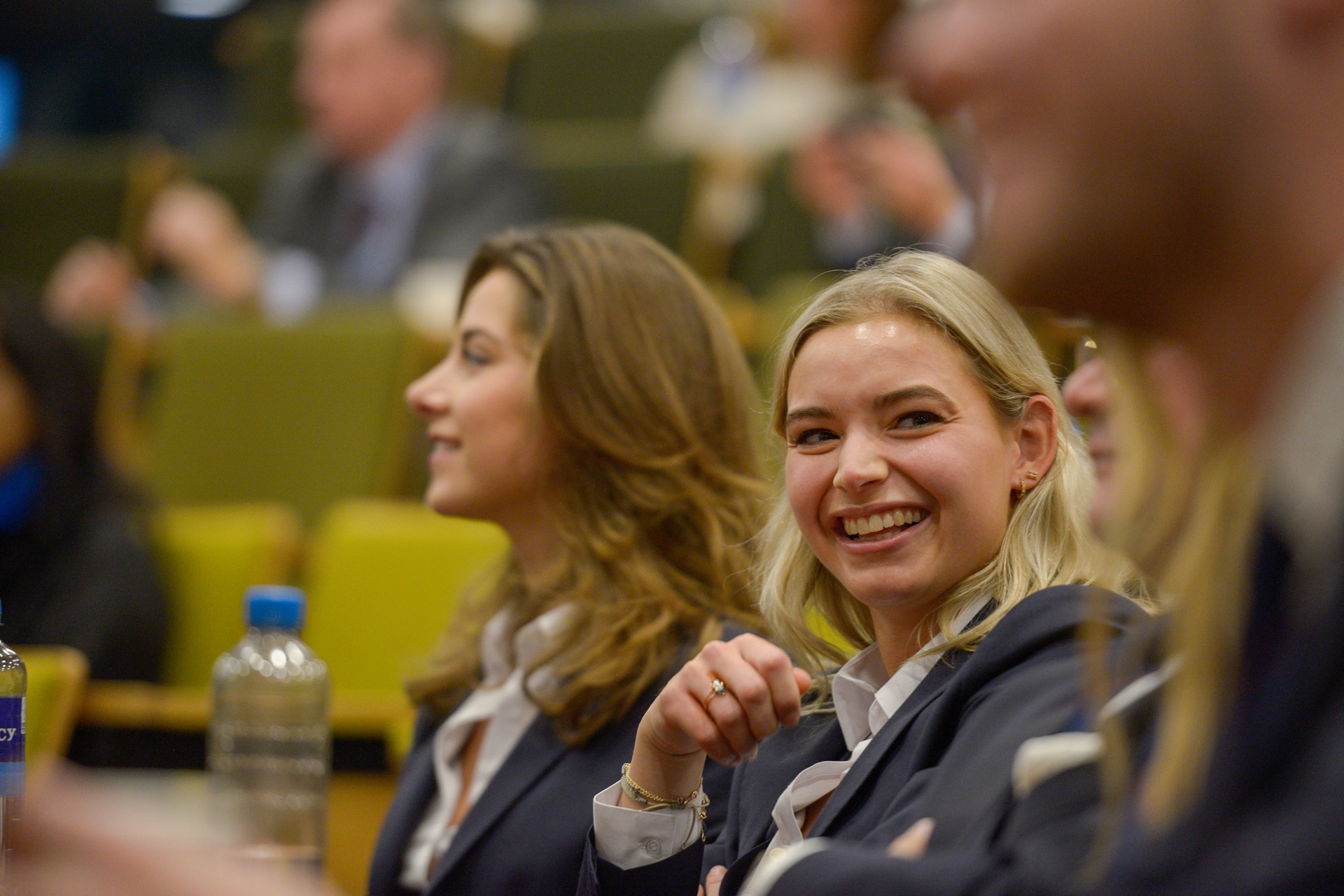 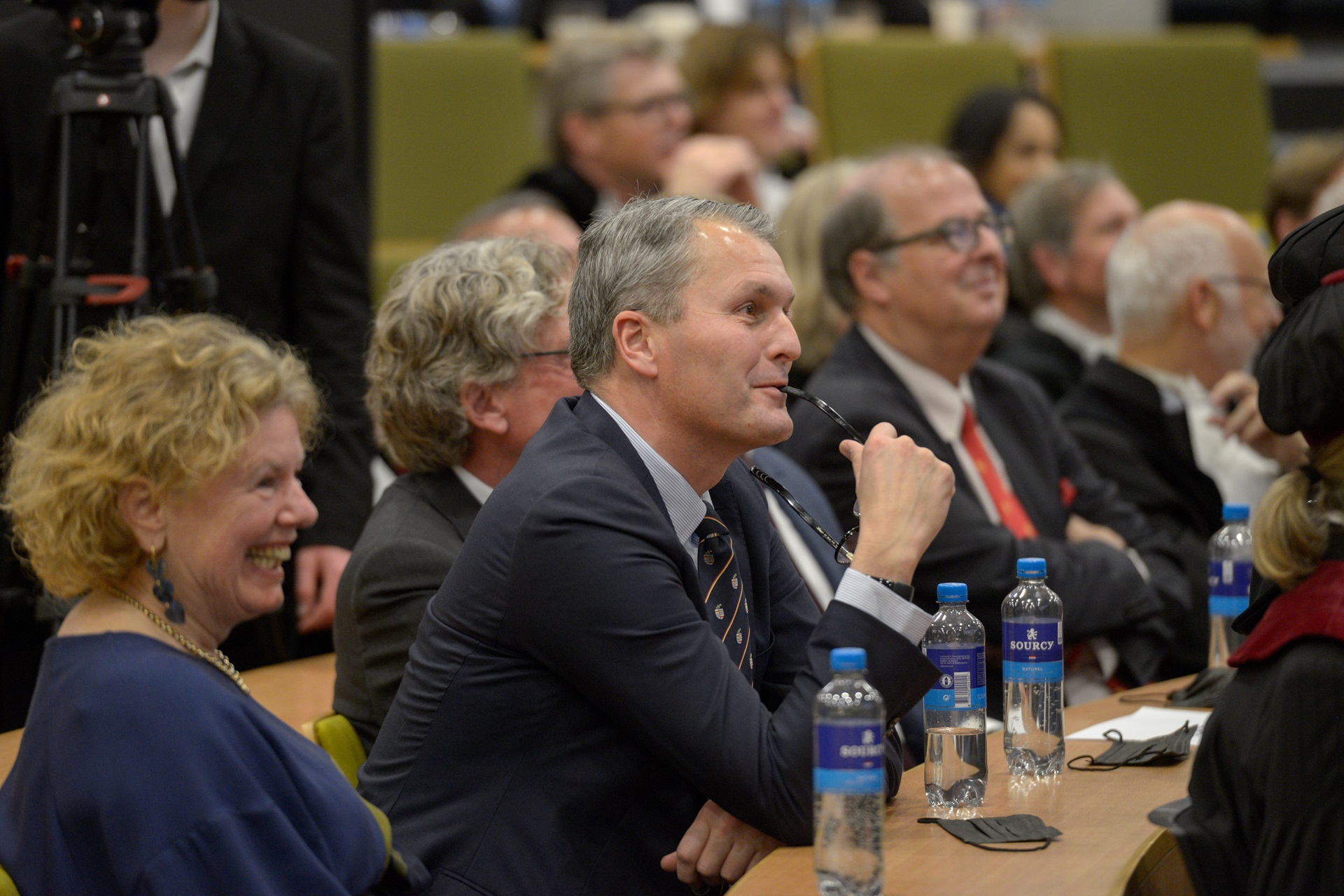