Society 4.0 - Build a vital and hopeful future for the next generations

In Society 4.0 author Bob de Wit paints a picture of a world standing at a crossroads and facing choices that will determine the future development of our society. Do we want to stay with the existing power establishments? Or will we display the motivation and courage required to combine the best of global and local and establish a Glocalcitizens community as the basis for an alternative and optimistic future society?

In his analysis of the historic development of society, de Wit asserts that ‘human society is in transition. We have left the industrial society that has brought democracy, welfare and peace to most citizens over the past seventy-five years behind us.’ The burning question now is: where are we headed? Contrary to the popular belief that the world is on the cusp of its Fourth Industrial Revolution, de Wit argues that we are in fact facing a Societal Revolution. Digital technologies are not just adding another level of industrialisation to society. They are actually transforming the very nature of society itself and precipitating dystopian developments like the emergence of ‘upgraded humans’ that no longer belong exclusively to the realm of science fiction.

“Digital technologies are changing our society and economy at least as fundamentally as machines changed societies and economies in the industrial revolution.”

De Wit describes our options for building a future society on the basis of eight key issues, which include rethinking concepts such as the nation-state and the distribution of income. Whereas the Elite Reset Society seeks to ‘divide and rule’ in order to retain control over the masses, a Glocal Citizens Society endeavours to stimulate shared decision-making by using the ‘wisdom of the crowd’ and revamp world governance by encouraging citizens to participate as ‘honourable humans’. 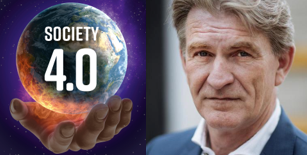 Far from painting a doom and gloom picture of our future, Society 4.0 is instead an inspirational call to action aimed at developing attractive future perspectives for our society. It sketches a clear path towards an inclusive society and offers logical answers to crucial societal questions that we ignore at our peril. The book is also an invitation to readers to join the discussion and de Wit expresses the hope that ‘this book is just the beginning. The beginning of a series of interactions’ with the ultimate aim of building a better future for all.